©Lina Pallotta. San Diego/Tijuana border, 1995. At dusk people start to move around the slopes close to the wall, ready to cross.

©Lina Pallotta On the Mexican side of the wall that separetes the USA/Mexican border there is a shanty town. 1995.

Hitch-hiking from the industrial aerea to the town. Piedras Negras, Mx 1994. ©Lina Pallotta 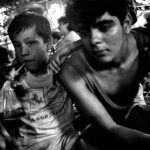 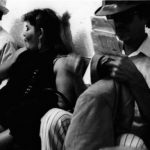 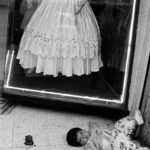 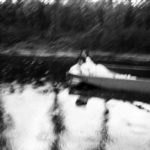 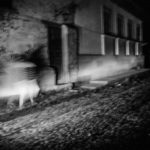 Patzcuaro, The Day of the Dead. Mexico November 1994. ©lina pallotta 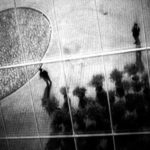 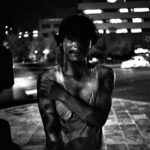 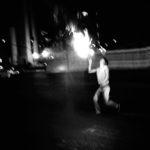 GET CLOSER IF YOU CAN

These images are crucial bits produced during several trips to Mexico, a country that has always attracted me, and, still, intrigues me. A journey that (embroiders) interlocks the encounters with people, my own personal experiences, and perception of the world.

My first trip to Mexico dates back to 1990 when I went to work at a photo-story called “The Day of the Dead”, a documentation of the rituals of the cult of the dead. From October 31 to November 2 the Mexicans across the country spend whole nights in the cemetery next to the graves of their loved ones. This project was carried out in Mixquic, and on Janitzio’s Island by Pátzcuaro’s lake in Michoacán. I went back there several times, the last time being in 1994.

During my trips to Mexico I also went up north, to the “great frontier” with the United States, mainly to collect and tell stories of women who “work and die” in the borderland, where tensions and issues often paradoxical, deeply mark the lives of thousands of human beings.

My interest in the frontier is related to the belief that there, across the borderline, contradictions are far more pronounced and strong: if in the center (geographic, political, cultural) of a country conflicts are in a sense softened, diluted, often hidden, on its fringes they are bluntly shown in all their rawness. In Piedras Negras, a small town on the Mexican border with Texas, I explored and documented the women’s personal lives employed in the maquiladoras – the assembly line factories – where low-cost products are manufactured for the markets of industrialized countries.

Later on I went to Tijuana and Ciudad Juarez to explore in depth the contradictions and conflicts in the border area commonly known as “La Linea”.

Today I see those shots as a witness and a denunciation of the impact that globalization could have when it results in uncontrolled exploitation of human beings. Although these Mexican images were taken according to the language and aesthetics of the documentary tradition, they have no claim to bring “one or the” objective truth that could/should endorse my preconceived opinions. I always asserted a personal vision of the world, and this is the real and profound poetic of my photography.

It is the fourth most populated city in Mexico, home to more than 400 maquilas and to one of the most powerful and violent drug trafficking cartel … In this city, hundreds of young women have been kidnapped and their bodies were found tortured and mutilated. Juarez is the city of the drug trade but also of the Feminicidio, an absurd and continuous massacre that was never properly covered by media.